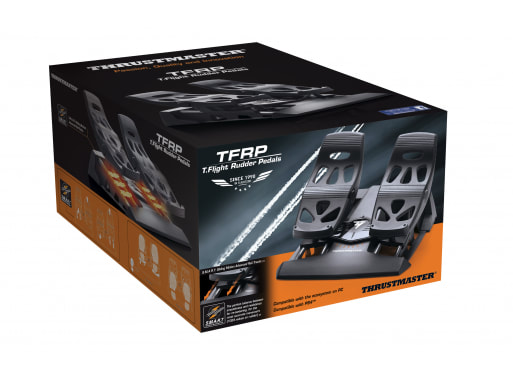 There's definitely a debate these days, if rudder pedals are a must or not? Most modern USB joysticks have a twist-action axis, which may be bound for “yaw” or “rudder” functionality in most games and simulations. So the actual need for rudder pedals is subjective. I think for the most immersive experience it's a yes.


I've grown really accustomed to using the twist of my aging Saitek X-52 Pro for the past decade now, and more recently the T.16000M twist worked even nicer. I had recently upgraded to a Warthog stick, so I lost my rudder twist function, because the Warthog doesn't have it, and didn't want to use the rocker on my TWCS throttle.


I've had experience with the CH Pedals, CH Pro Pedals, Thrustmaster (TM) Elite pedals, and original TM RCS pedals. Of all of those I always liked the RCS/Elite pedals most, due to the spacing of the pedals, and the springs seemed sturdy too on both. They had a wider placement between each pedal than all the others at the time. These days CH still makes the Pro Pedals, which is literally the same design they've had for over 20 years now, only in USB form. Saitek/Logitech has a set of pedals I've never tried, and VKB Sims makes a set I have no experience with either.


I was shopping around and discovered that the the VKB Sim pedals were in the $215 range plus shipping, the Saitek/Logitech pedals were $150 plus shipping, and Thrustmaster just came out with a new set of pedals as well which run a whopping $550, called the TPR pedals.


Thrustmaster also makes the T.Flight Rudder Pedals (TFRP), which I was able to snag on Amazon for just $89 and free shipping. It was a clear choice to make, because money was tight, and Thrustmaster really has never let me down. I've seen mixed feelings about these pedals online... many claim they failed after little use, others just don't like them period.


My experience, at least for now, for roughly a month in, is pretty positive for the most part. They're black plastic, and seem to have the same “on rails” design as the TWCS Throttle. It's called the Sliding Motion Advanced Rail Track. Movement appears to be smooth and accurate. The spring appears sturdy, but maybe not as tight as I remember the old Elite pedals I owned ages ago. They don't move by accident, they aren't weak by any means either. They recenter just fine, so no issues there either.


The movement is natural (for rudder pedals that is)... as you push one pedal forward the other pedals moves backwards. Each pedal has another axis allowing you to tip them forward and back for toe brakes (or gas and brake of you wanted). I set them up in DCS World without a hitch with independent toe brakes and rudder/yaw control. I was able to seamlessly taxi around runways, and yaw as needed once in flight. There's little heel rests that are supposedly removable, but I left them on. These can be removed with the included hex-key that came in the box.


Connectivity can be achieved two ways. There's an RJ12 (phone jack-looking connector) which allows you to plug them in directly to the TWCS throttle port, or directly to the T.Flight HOTAS X controller port for the X-Box and PS4 versions both. There's also an adapter to convert it from RJ12 to USB to use them with other non-Thrustmaster sticks and throttles on the PC. I plugged the set directly into my TWCS Throttle port, and when doing so, they are only seen and calibrated as part of the TWCS Throttle in most games and simulations.


You can go the USB route as well, but I am already using a ton of USB ports, and figured I'd save one this way. If I used them via USB they'd also show up in the TARGET software, and separately in other Windows titles as the TFRP device. Since plugged into the TWCS direct via the RJ12 they're just used as part of it. In Windows 10 games and sim configuration menus for joystick/throttle/etc axes... I just set them up as an axis off the TWCS.


Speaking of TARGET, I'm also able to create a configuration to combine my Warthog joystick, TWCS Throttle and TFRP pedals all into a single USB HID device that Windows sees, allowing me backwards compatibility with older Windows titles that can only utilize a single HID device in Windows. So it works great in the Star Wars Galaxies EMU I play called SWG Legends, and other older titles I have loaded as well.


Keeping them in place is achieved by five square rubber feet on the bottom of the unit. They do a fine job at keeping the pedals sturdy and in place on the rug under my desk. By design you can also place your heels on the floor itself, and push either pedal too manipulate them that way, or just place your feet completely on the 10.5-inch foot-pads. I wear a size 13 shoe, and had no issue with them, even if my toes hung off the end a little, it didn't effect usage.


I think my only concern is since they sit under my desk... I tend to rest my feet on them when not in use, and I worry about unintended wear and tear. I'm 6ft 245lbs, and built more like a pro wrestler or NFL player, so that's a lot to be resting on them. They are after all plastic, but seemingly sturdy plastic. 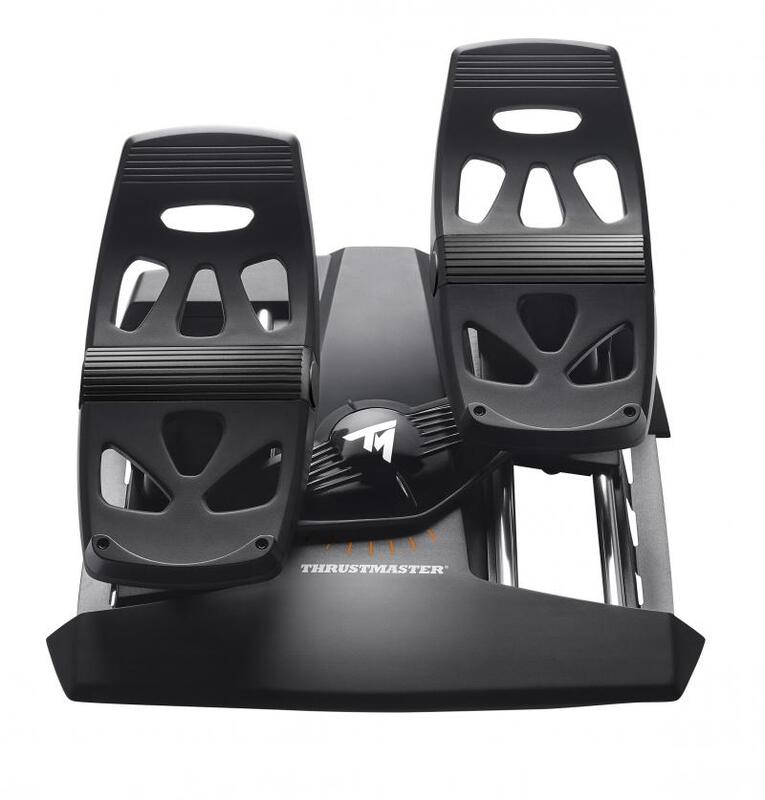 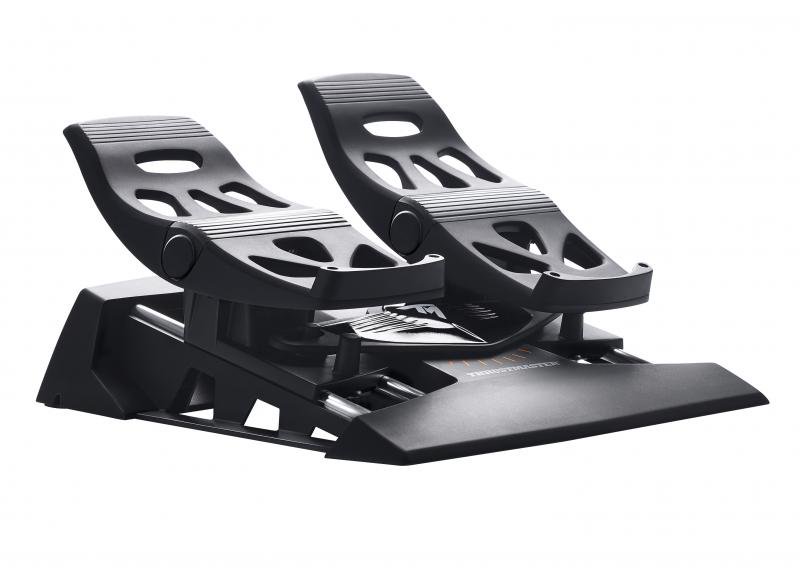 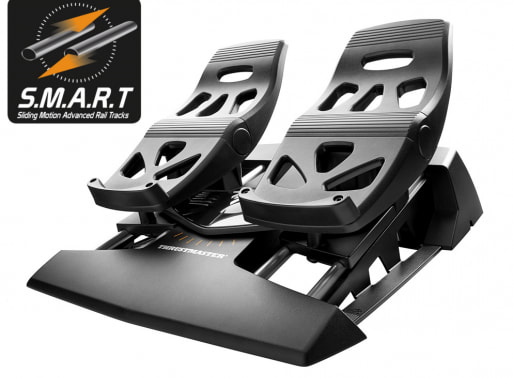 I'm having a hard time coming up with anything bad to say about these pedals. Thus far they've simply worked, and worked well. In DCS World. WarThunder, Mechwarrior Online, ARMA III, SWG Legends no issues, and recently I loaded up Falcon 4.0/BMS, X-Plane 11 and Prepar3D, and not once have they failed me in any title. In helicopters and fixed-wing aircraft both, they just worked fine.


At the price-point they're sold at, it's hard to knock them. My only complaint is that I wished they were spaced farther apart more like the old Elite and RCS pedals from Thrustmaster. I see why they designed them this way, because I can configure them as gas and brake pedals in a driving game or simulation. They could easily perform double duty, and that was the intended design.


The TFRP perform the duty I need them to, offering me yaw/rudder control, and as a bonus toe-brakes as well. At $89 delivered I have no real complaints, other than I wish the spacing was more between the pedals. However at that price, I'll just deal with it.