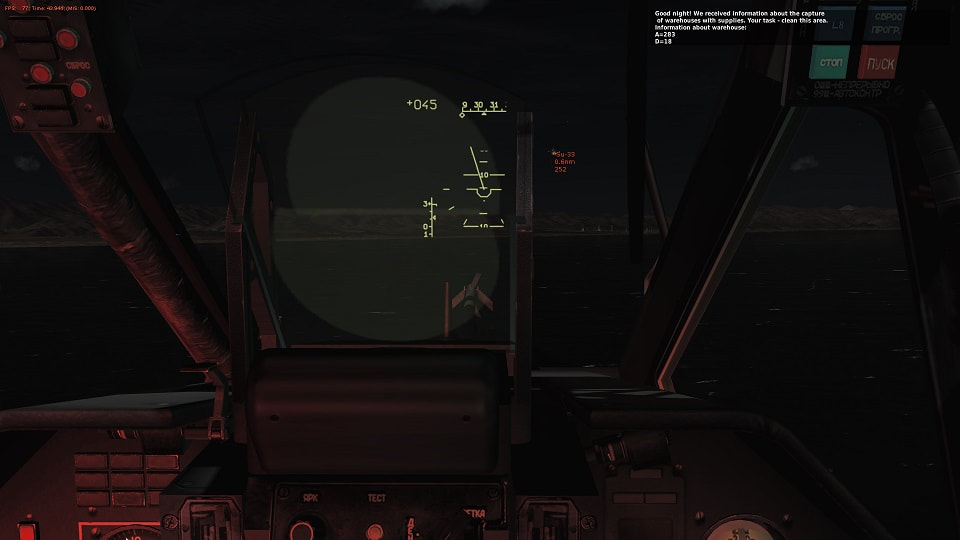 DCS seems to become an addiction. No other word describes it. There's always a thirst for more, even if you haven't completely mastered the planes you have purchased. Eagle Dynamics recently had a “Spring Sale” which knocked down the price on a lot of the modules by 50%.


Sadly the most popular ones like the F/A-18C Hornet and Persian Gulf map modules were just 25% off. The most recently released modules like the F-14 Tomcat and MiG-19 weren't on sale at all. I would have snagged the F-14, but I'm not paying $80 for any module. Maybe next time.


I did however dive in and snag the Hornet, Black Shark 2, the Nevada training grounds/Las Vegas map and the AV-8B Harrier module. So I now have three new “high fidelity” modules, which are a huge step above the Flaming Cliffs 3 planes (which also come separately as modules as well).


I had the A-10C years ago when it first came out. So I've had a taste of what the super-realistic modules are all about back then, but that was almost a decade ago now, and while I enjoyed it then... the A-10 itself isn't an air-frame that I'd say fits my play style. I recently found my old serial key and added it to my account, but still haven't touched it much. I also had the original Black Shark upon release, but I played it in the arcade mode more than anything back then, because it was just too damn hard to learn as I recall. I'm finding again, that it's probably been the hardest to learn today too.

Some things I learned right away...The Training Missions assume A LOT. I really wanna say the training missions suck, but I won't completely say that knowing what I do now. They assume you have read the manuals, or that you already know what something is that they are talking about, or that you know where said button, switch or dial is.


Other times you are shown what to do, and you do it, but the highlight graphic just stays around that switch, leading you to think “did I do something wrong, or is that damn thing bugged?”Sometimes you can move ahead to the next part with space-bar, and it's still illuminated. One mission in Black Shark 2 appears either bugged, or I'm just doing something wrong, because I can't even get a cue to move on with the space-bar either. The training missions are really a mixed bag of helpful, and useless.


Via some trial and error I found that if you do a search of your DCS installation folder...you will find the .pdf manuals that they give you with each module. I however didn't know I had any manuals until someone on the Facebook DCS group that I frequent mentioned it.


The manuals are a good starting point to familiarize yourself with some of the things you'll need to utilize in the training missions, but some stuff, like the “Sensor Switch” or “TDC Slew Switch (Target Designation Cursor)” are things you'll need to bind to a HOTAS hat, or slew device on your HOTAS gear to properly utilize them.


I know they say you don't need a HOTAS setup to utilize DCS World, but I call bullshit, because hitting crazy hard to remember key combos for TDC move down, and more at once to press to make it move right, up, down, etc just isn't practical. For these more in-depth modules a good HOTAS is a must period. Especially when you need to be slewing things around to designate a target, zooming radar ranges in and out, etc.


In my search for better learning my DCS modules, I also found myself watching a ton of videos from The Grim Reapers, Spudknocker, RedKite and Growling Sidewinder... just to name a few. I highly recommend viewing some of their tutorial videos first, and reading some of the docs you can find in the installation folder, and then, and only then giving some of the training missions in-game a try. Also be prepared to be disappointed, some will definitely bug, or make no sense even after doing some homework.


It's also recommended to setup your HOTAS with some of the basics ahead of time too. The trainer will say do X, Y or Z, and some of which aren't key commands, but HOTAS tasks, or if they are key commands, they're usually complex ones that you simply don't have memorized yet. If you aren't sitting there with a print-out of every possible key command, you're gonna be lost. I also didn't find any good key command reference cards like the old sims used to come with. That's sorta a bummer too.


Once in flight I found that the Hornet seems very smooth to fly. It feels like it corners a lot easier than say the F-15C, but the Hornet still seems to accelerate a lot slower, and I still believe the F-15C goes a lot faster in a straight line. Turning seems a lot smoother and easier to me in the Hornet overall. I definitely like flying it a lot.

Black Shark 2 is still a bear to control for me. I'm yet to learn why I keep snapping rotor blades and plunging to my death, and even though there's an auto hover command, getting the damn thing to stop and allowing that command to work takes A LOT of practice. Don't get me started on the weapon systems deployment. I think I have a lot harder time dealing with the planes in Russian, over say US warplanes.


I really enjoyed it ages ago, but I just can't get a good hold on how to master this one yet. It's probably the most frustrating module I have. Thank god it was only $25 on sale. It's so damn cool, I'll eventually have to learn it, but for now it's on the back burner.


The Harrier is really cool. I think I'm intrigued the most by it. They say it's not a good air 2 air platform, but I'm enjoying learning its systems, it has been fun, and hasn't overly frustrated me in the process. I just think it's the coolest little plane so far out of all the modules I have to date. I look forward to learning the VSTOL stuff more, and ground pounding with it too.


Getting used to clicking things in the cockpit takes some getting used too, but I realized a lot of the stuff I did with my HOTAS for the Flaming Cliffs 3 planes can be done with the high fidelity ones too like using a hat to flip through HUD modes, slewing the TDC, etc. The cockpit workload can be overwhelming, but not always as bad as I had imagined it might be. Don't get me wrong, its a much bigger workload, but practice makes perfect.


I also am still not impressed with, nor do I want to do the checklists and startup procedures. Thank god for the auto-start up commands. That's gotta be the most god-damn boring things to do in DCS World, and even with the auto-start-up... you still gotta sit there for minutes while every little thing is pressed, clicked, turned, and dialed in. There's ways to create your own missions with a "hot" ready to go plane already started up too. I just haven't got that far yet. I'm utilizing the missions already created. 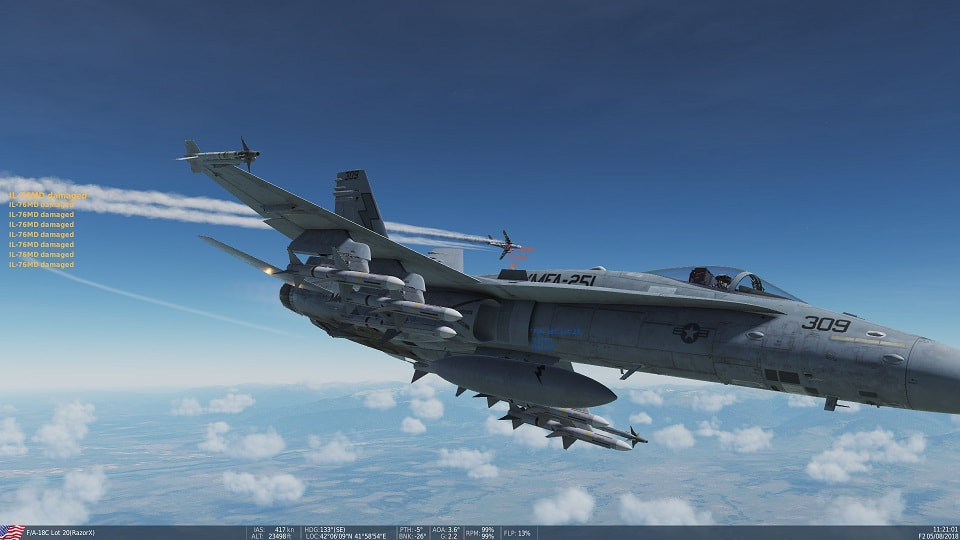 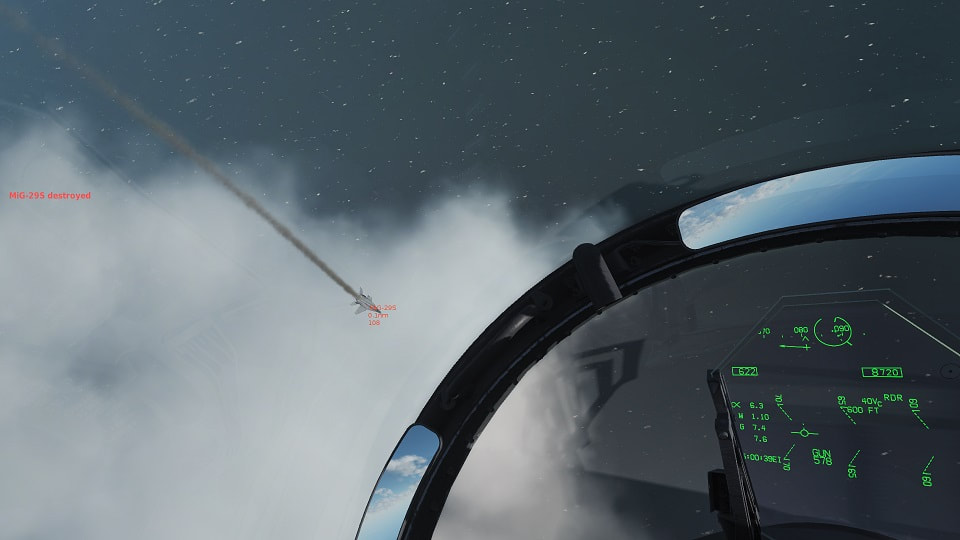 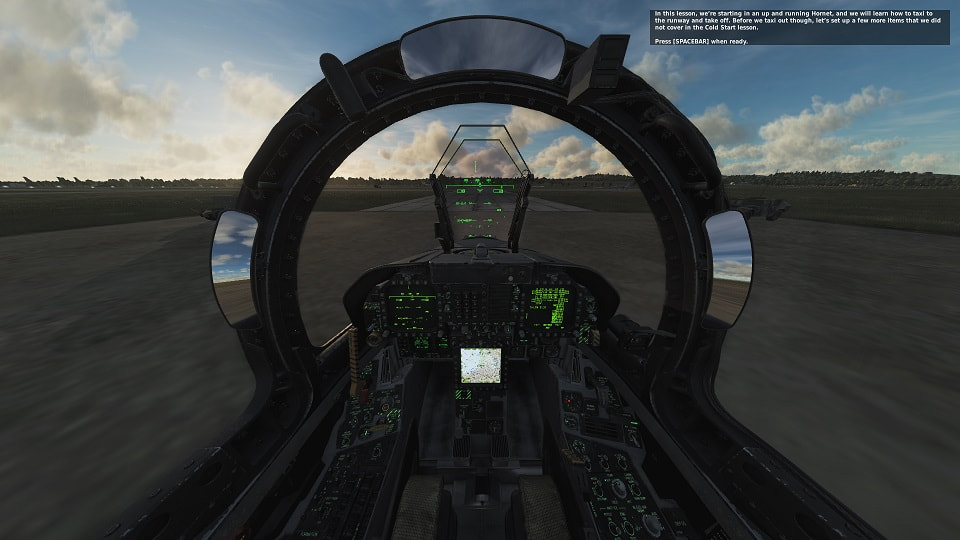 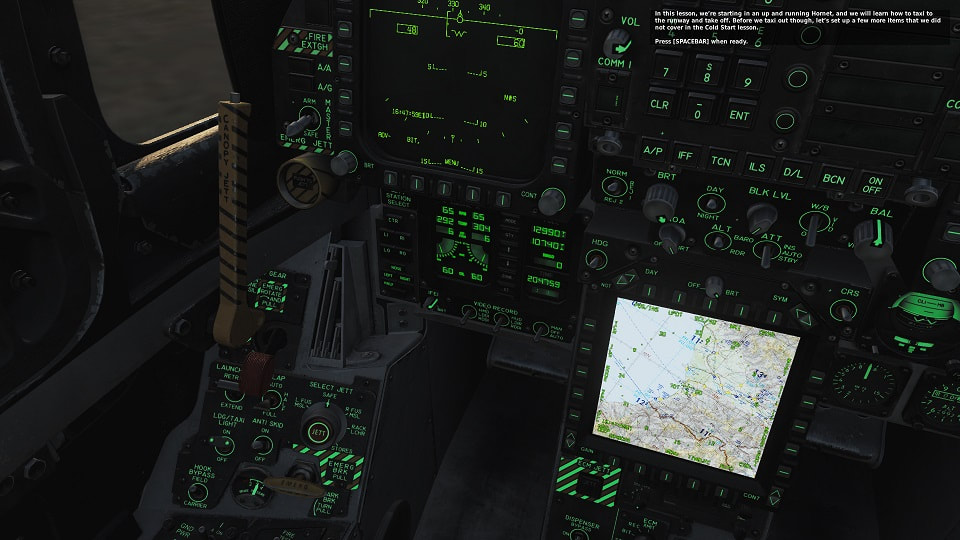 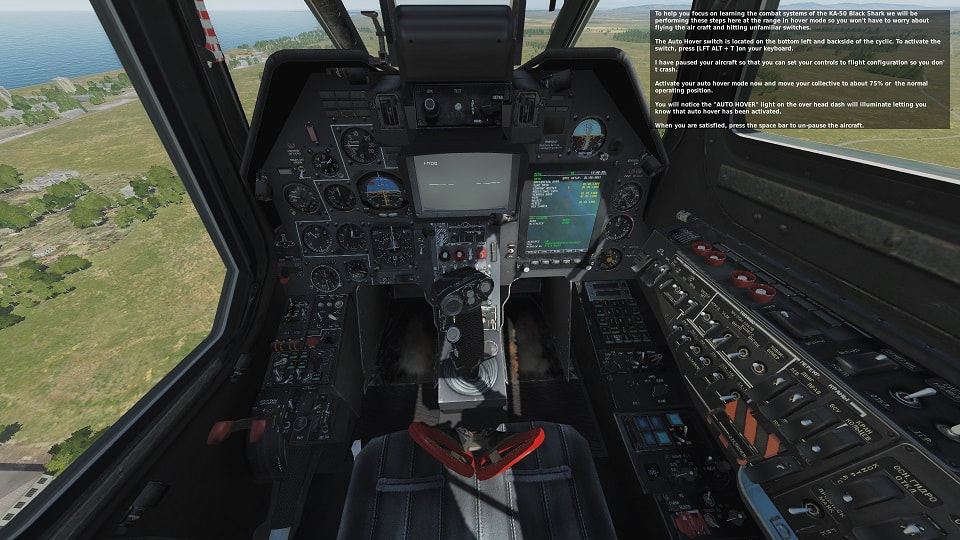 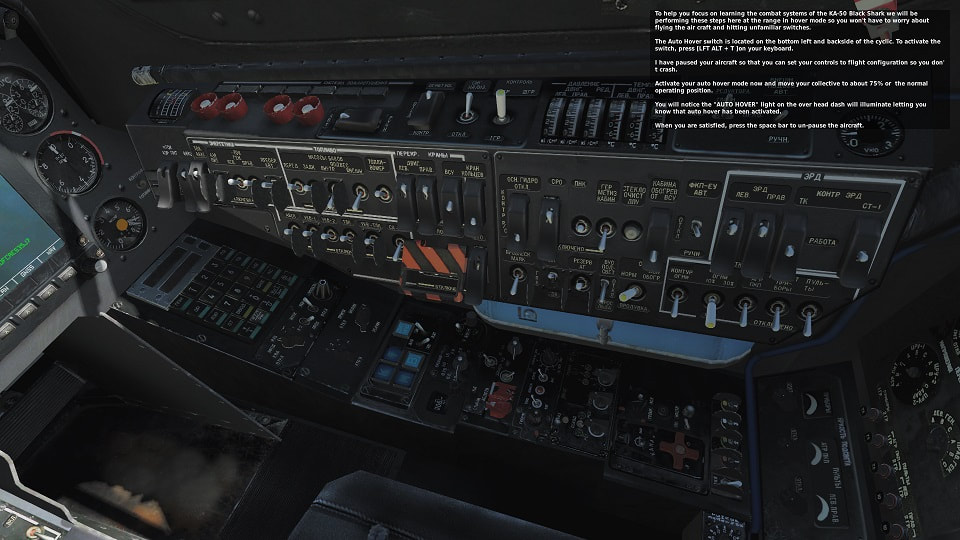 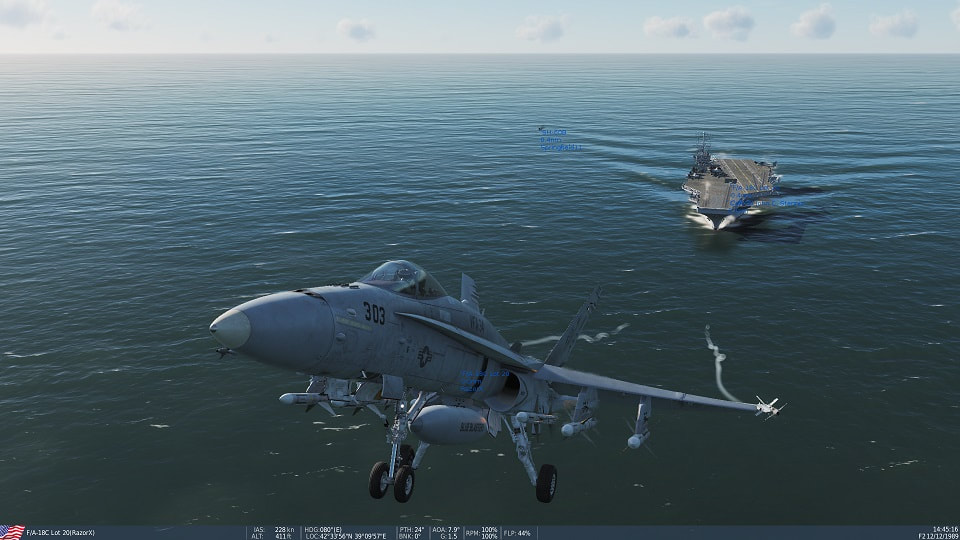 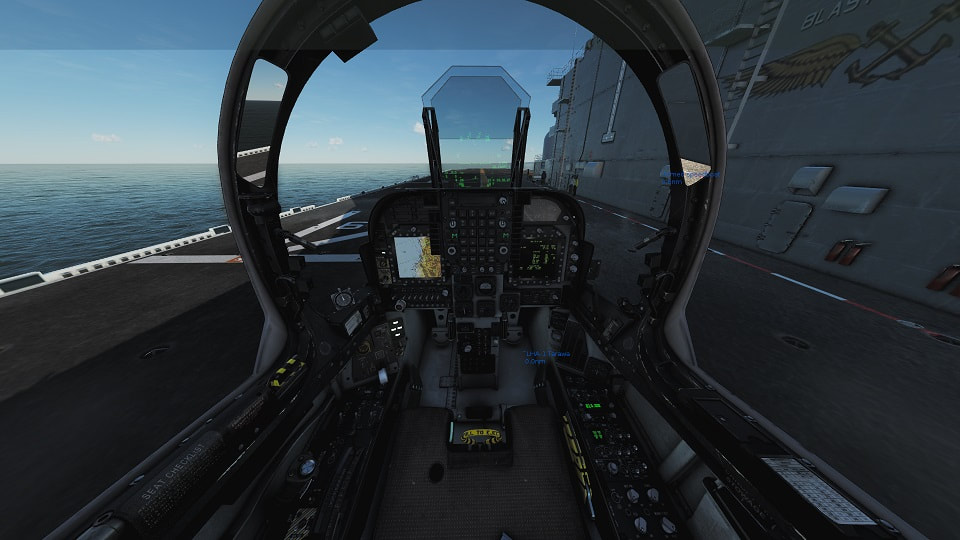 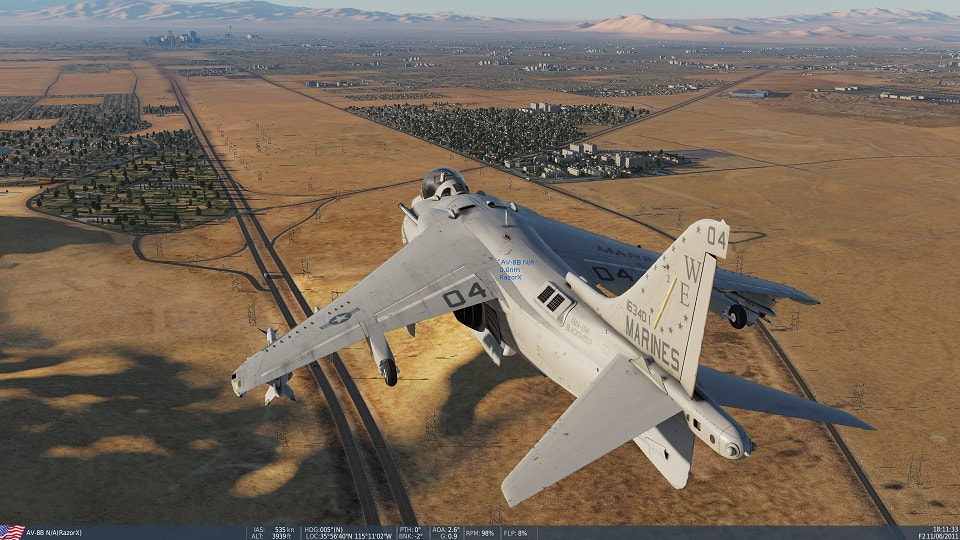 It's a big step up going from the Flaming Cliffs 3 planes to a high fidelity module like the Hornet or Harrier. I think being familiar with sims in general has helped a lot. I mean granted the majority of the flight sims 20+ years ago weren't this in-depth, nor did the virtual pilot have that as heavy of a work load to simulate then.


At times the workload is a bit much, and I'm learning that “active pause” is your friend. There's so much to do, that to do it quickly, and the right way, is downright overwhelming at times. But like anything, muscle memory will come into play as I perform the procedures more and more. I also just upgraded to a HOTAS Warthog joystick, over my Thrustmaster T.16000M, which gives me A LOT more buttons and hat switches at my finger-tips, which are much needed when you jump up to the high-fidelity modules.

While you can check some things to be more relaxed under options (flight model, unlimited ammo, etc), it doesn't change the fact that you have to lock up a target with the radar the right way, select the right modes, still make sure the master arm switch is toggled, etc, etc, etc. So there's really no way to make the pilot workload game-like, or lite. That's not a bad thing, just an observation.


All in all, I'm super excited to come home from work to log in and attempt a mission or two as time allows, more so with the AV-8B and F/A-18C now. I also look forward to spending even more time on the weekends now with DCS World. Now if only they could fix the dumb-ass wingman AI, and that stupid bug where IF my pilot dies, I literally have to edit the logbook file manually to bring my pilot back to life so I don't loose campaign progress! That's a whole other article altogether!