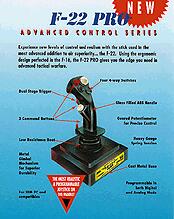 Thrustmaster's latest and greatest stick has been unleashed upon the world. And what a stick it is. If you thought the F16 FLCS was the best thing since white bread, or if you didn't, you'll no doubt spend your next paycheck on purchasing this piece of hardware!

The F-16 FLCS is a fine piece of work, but my biggest complaint about it was that it just didn't feel as durable or sturdy as the Suncom F15E line of sticks. Well, now Suncom looks to be out of business, unless they pick up and rebuild as they said they would, and Thrustmaster has answered my pleas. In the past, I've gone off on a limb and publicly said that the FLCS felt like crap next to any of the F15 sticks. To this day I stand by that opinion. As far as what the FLCS could do however... well, lets just say the F-22 Pro can run circles around all of the Suncom F15E sticks, combined.

Lots of Thrustmaster users still use a Pro FLCS & WCS MKII combo, mainly because they like the feeling of the Pro FCS. Even though the FLCS & TQS blow away what you can do with a FCS & WCS combo, many would rather have that realistic feeling, and deal with the limitations. It's hard to go back once you've done some flying with the sturdy rugged feeling of the Pro FCS.

Those days are over now! Pro FCS users who've always wanted to have the near-unlimited programmability of the FLCS can now step up without losing the feeling they've grown to love flying with. At a glance, the F-22 Pro looks just like an FLCS. There's no denying the resemblance, because it has the same buttons, hats, and switches (except for the download/run switch that the FLCS had, but we'll talk more about that later). What looking at the F-22 doesn't reveal is the fact that it's got the rugged springs from the Pro FCS inside! The FCS is a smaller stick, and the springs aren't as tight as they are on the Pro FCS because the F-22 handle is larger, but it still feels like the Thrustmaster stick you've always dreamed of! Finally, I've found a stick that feels better than the Suncom F15E line of sticks!

There are other differences hidden under the sturdy solid all-METAL base. Yes, I said METAL base. This stick is really built like a tank. If you had to, you could easily subdue a person with this thing, making it as lethal on the ground as it can be in the virtual air. :-)

The F-22 offers even more programmability than the FLCS did. Now you can program any of the buttons, hats, or switches to be one of the four analog gameport buttons. For instance, if I wanted to have HAT1 Up position act as the trigger of a four button stick, I could. Or I could program a TQS button to be the second or B button of the joystick, etc, etc, etc. The possibilities are almost endless. And now the /A switch is not used to enable the positions previously available for analog button emulation anymore. It's been replaced by the PORTB1-4 IS commands. If I wanted to program my trigger as the analog trigger in USNF, I'd simply use this line... "PORTB1 IS TG1", instead of the old /A commands. Or "PORTB3 IS BTN T6" would enable the TQS pushdown rangeknob to act as the third analog joystick button.

Thrustmaster also changed the commands for the arrow keys. Now the commands for the arrows are AUXUAROW, instead of UAROW for the UP ARROW on the keyboard. All they did there was add AUX in front of the old commands. Aside from the /A & arrows keys, the files and language are pretty much the same as before with the FLCS, only now they are .F22 & .M22 files, instead of .B50 & .M50 files. Modifying your old favorite FLCS & TQS or FLCS & WCS files is not hard either. All you need to do is change the extensions from .B50 & .M50 to .F22 & .M22, and you'll need to change the arrows key and /A commands to the new format. I've not had much of a problem converting my existing FLCS & TQS files for use with the F22 Pro.

The stick just feels incredible. What they did was add more fiberglass to the handle itself, giving it a more solid feel. The FLCS handle felt kinda hollow. Not this stick! The buttons and switches also feel sturdier than those on the FLCS as well. Along with cast zinc moving internal parts, and the all-metal base, you're just not gonna find a finer stick outside of an F-16 or F-22 cockpit anywhere!

I've flown the actual F16 simulators at Lockheed Tactical Aircraft Systems in FT Worth, Texas just a few months back, and those sticks are the all-time best, but the F22 Pro is as close as you're gonna get to that kind of quality off the shelf. Well... there's always a company called MSI (NOT Military Simulations Inc.) who make those $600-$2000 handles for the high-end simulators like the ones I used to fly the Lockheed simulators. I don't think too many of us are willing to spend that kind of cash to fly Longbow and Back to Baghdad. Thrustmaster's F-22 Pro stick only costs around $125 (street price), not thousands.

I used the F-22 Pro with a TQS, and here's a list of titles I've since played with that combo, and the Thrustmaster RCS rudders...

We experienced no problems with any of those sims and the aforementioned equipment. Flying at under 100ft in Longbow with the F-22 Pro and our TQS was a fantastic feeling! Getting into some multiplayer mayhem in NATO Fighters and head-to-head HIND vs. Apache matches was just as enjoyable with this awesome combo. Now that we got the latest patch for Descent II (to enable the full registered version's 3D ViRGE acceleration), I've gotten my fill of some Descent action with this combo as well, without any problems. USNF, MF, EF2000, you name it, I've played it with this combo, and I used most of the files I used to load into my FLCS & TQS combo, with a few minor modifications. Of course F-22 Lightning II from Novalogic was a joy with this combo.

Not only does the F-22 Pro offer all of the features I mentioned earlier on, but remember how I mentioned the absence of the download/run switch? Well, there's no need for one on the F-22 Pro. The software used is very much the same as the Command & Control center from the TQS & FLCS, and now you can store more than one file into the F-22 Pro's memory at once! Unfortunately, there's no way to tell just which files are in there, but if a file is still in memory, it won't automatically download it. It will just set it up, and off into you're simulation you go! And whenever you do need to download files into the stick's memory, it's all done automatically.

No more of that "put the switch in the run position and then hit enter" crap, or that "now hit the S1 button" blaa, blaa, blaa. Unlike the CH Pro Throttle's user-friendly software, the TM software works just fine in Win95. I'll admit that programming the Pro Throttle is simple, but it just don't work in Win95. At least with the F-22 Pro, you can use the software in either DOS or Win95. I believe it will even work with Win3.1. 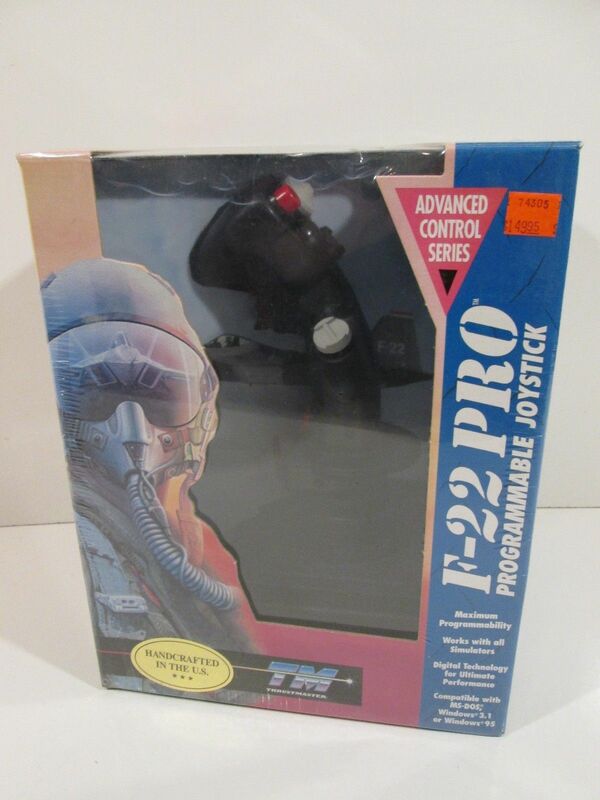 A stick this awesome hasn't hit the market since Thrustmaster first unleashed their FCS! They've taken the almost unlimited programmability of the FLCS, improved upon it by adding more features, a rugged & heavy-duty base, stiffer heavy-duty springs, more durable buttons & switches, full compatibility with the WCS MKII and the TQS, plus that same unlimited compatibility of the FLCS, and they've thrown it all into one stick!

Now for a newbie, it's still gonna be almost as tough as learning how to program the FLCS. This time around, the F-22 Pro has a far better manual than the F16 FLCS did, but it's still gonna take some time for a newbie to learn how to get the most from the F-22 Pro. FLCS owners who already know the ropes should have no problem adapting to the minor changes in format of the .F22 & .M22 files.

When I buy tools, I usually go for SEARS Craftsman, because we all know that Craftsman are the best and most durable tools around, with an unmatched warranty to boot. Sure, the competition gives away posters with tool girls and such, but the Craftsman name has proven itself as the king of tools for the serious handyman by offering a superior product all 'round. Thrustmaster has truly earned the title of "the Craftsman of programmable joysticks" for serious jet jocks in my book, now that they've given the world the incredible F-22 Pro!

Sure, Thrustmaster doesn't offer a three year warranty like the competition, but I have yet to see them turn someone down for tech support or replacement parts, even after the expiration of the warranty. They've earned the respect of many with their fantastic on-line support and presence here on the internet and on some of the on-line services. Besides, with the way the F-22 Pro is made, I doubt anything on it will be falling off or breaking anytime soon. You've got a better chance of breaking your arm, because if you're used to the FLCS or a CH stick, this thing will give you an instant workout. Start pumping up girlie men, if you want to fly like the pros do!

Yea, that's a pretty high rating, but it is well deserved! Wives may hate their husbands once they hear just what their significant other wants to spend their next paycheck on, and parents just won't understand why their kids "need" another Thrustmaster stick when they already have the FLCS, but the serious jet jocks and PC gamers will know just why they want it once they see and feel just what the F-22 Pro can do.
It takes a proven successful design (the F16 FLCS), and improves upon ALL of its weaknesses, in just about every way imaginable. I've not tried one of those $500 FLCS Special Edition sticks first-hand, but for hundreds less, it looks like you can get most of what it offers with more programmability for a street price of around $125. Chips & Bits is offering it for $119. Plus, if you've already got a TQS or WCS MKII, fear not, because they work like a charm with the F-22 Pro, just as they did with your FLCS.

In reality, if you have an FLCS already, you give up nothing and gain everything with the F-22 Pro. Outside of a high-end multi-million dollar simulator, or the 20 million dollar F16, you're not gonna find a more realistic and durable feeling and performing joystick that also offers the unlimited programmability of the F-22 Pro offers. 'Nuff said!


This is another oldie but goodie. Originally published at PCME.com on October 11th 1996. Notice how this stick resembles the original F-16 FLCS, which started it all for this design, later carried on all the way down to the later HOTAS Cougar and now HOTAS Warthog. Good times!