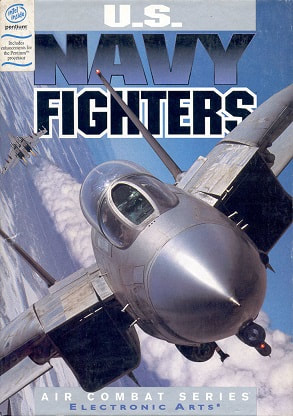 US Navy Fighters is one of those games that comes along once every 200 or so games. It's one of the most graphically superior games on the market today. It is also one of the most system intense. To actually run this, MY suggested config is REALISTIC. Visually, USNF is like no other Flight Sim ever.

The sky texture (which munches up CPU power fast!) is stunning. Also, the ground targets are well done in terms of detail and size ratios. The other huge advantage USNF has over others is the unique outside views. Hitting F8 will give you a view of your targeted enemy. You can then fly your aircraft from that external view!

The Weapons to choose from are pretty accurate from what I've seen in other flight sims. Though USNF is not a true flight sim (the flight model), it's one of the choice games of most flight sim fanatics for its sheer beauty!

With USNFUTIL, a freeware program which can be found at most flight sim oriented FTP or WEB sites, will let you fly ANY of the planes in USNF, and that's A LOT! In the game itself without the utility you can fly the F-14 Tomcat, F/A-18 Hornet, F-104 Starfighter, Su-33 Flanker, F-22 Lightning II and the A-7 corsair II. With the utility installed, you can fly at least 30 different aircraft. The F-15 Eagle, Mig -29 Fulcrum, SU-37, Harrier, Yak Freestyle, MIG-27, MIG-31 and many more!

The upcoming US Marine Fighters will feature the realistic Harrier with V/STOL capabilities and the AC-130 (a flying CANNON!) among others. But back to USNF. The missions are quite hard but well done, and when you get tired of the missions provided, you can make your own with the PRO mission builder. Like DOOM, there are a bunch of missions that are as good and hard as the original USNF missions available freely from various FTP and WEB sites.

You can choose to play Tour of Duty mode where you are a pilot in the Ukraine defending the USS Eisenhower. There are many carrier missions which catapult you off the carrier for the realism of carrier based missions! The Quick Mission Builder allows you to choose ground targets and the number of enemy planes in preset areas.

The control of this game will take a bit of getting used to for novice flight sim fanatics, but veteran simmers will be right at home. I suggest a GOOD stick like a Thrustmaster or CH Flight stick Pro. The USNF Update Patch v1.1 gives the CH PRO direct support in USNF. Once you get your controls down, it's quite a thrill ride!

The sounds in USNF are GREAT, I mean you can hear your wingman asking for what to do on the radio. Missile launches and explosions can be heard in crisp detail. The music is another great part of this game. It's done by The Fatman, a veteran of many successful computer games (7TH GUEST). 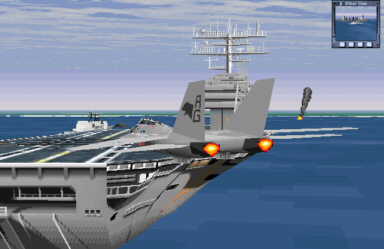 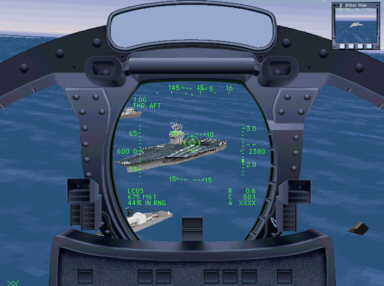 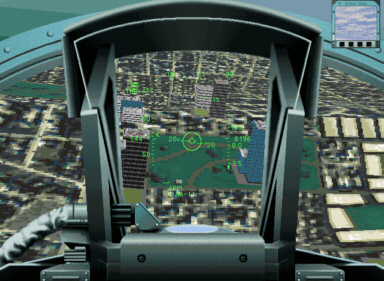 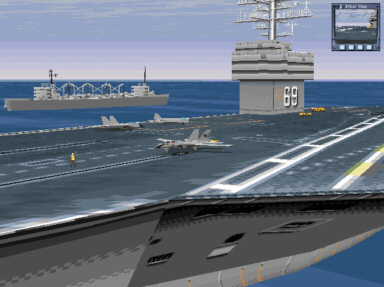 It's a great game if you've got the hardware to run it. I've tried it on a 486DX2-66, a 75mhz Pentium and now, on my 120mhz Pentium its smooth sailin'! It is playable on a 75mhz system, you'll just have to turn off most details. For the BEST performance boot with just HIMEM.SYS in your CONFIG.SYS as you memory manager. It runs best with just XMS (like all protected mode games). If you have at least 16 Megs of RAM give Smartdrive 2048k for CD-ROM caching.

In the manual it says DON'T run smartdrive, but that's because they expect you to have only 4 or 8 megs of RAM. With 16 MB or more, you can load it without a hitch and get some more performance from your system. Also, a dedicated joystick port is highly suggested, because the sound card port most people use will actually slow down the joystick response time. When I installed one in my system I noticed an immediate increase in response and movement!

I'm pretty sure this is the second review I ever wrote! I was such a noob back then, and my writing skills were terrible. It's also very likely the second review we ever posted at PCME.com. At that time I'm pretty sure this was included in the little downloadable magazine we produced, which was like a DOS text viewer package with screenshots. We put that out for a month, before I talked my partner into publishing articles purely on the web, and ditching the downloadable format altogether. Those are also the original screenshots I took way back in 1995 too.

I also thought this may be of interest...

I doubt any machine from today can run it, but if you have a retro-gaming PC laying around it may be worth giving it a whirl. Don't forget to manage that memory! Haha, it's crazy the shit we had to do to run a game back then. Don't get me started on  Falcon 3.0 and the difficulty of making the right boot disk for that sim lol